Home / Blog / The Past, Present and Future of Air Quality Regulation

BLOG
The Past, Present and Future of Air Quality Regulation
Share

The advent of air pollution as a serious issue can be traced all the way back to the industrial revolution, as the reliance on fossil fuel burning for energy led to increased amounts of harmful pollutants being released into our atmosphere. Air pollution continued to rise throughout the early 1900s culminating in the ‘Great Smog of London’ in December 1952, resulting in  around 4000 deaths in just a few days. 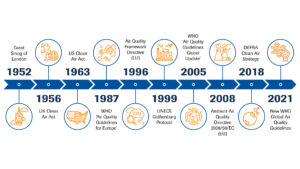 In 1956, in response to the Great Smog and a growing concern for air pollution, the UK’s first piece of air quality regulation, the Clean Air Act, was established. The act introduced several measures to combat the effects of air pollution and to encourage movement towards smokeless fuels five years later, the UK established the National Survey which was the first national air pollution monitoring network in the world.

Not far behind the UK, the US published its first piece of federal legislation on air pollution with its own Clean Air Act in 1963. The act established a national program of air pollution control and pledged $95 million over three years to encourage the development of state pollution control programs. The United States Environmental Protection Agency was then established in 1970 who then published the National Ambient Air Quality Standards.

In the EU, the first major piece of legislation relating to air pollution was the 1996 Air Quality Framework Directive. This framework laid out the basic principles on how air quality should be managed in EU member states. This was then followed by three ‘daughter directives’ in 1999, 2002 and 2003 which prescribed limit values for a range of pollutants including sulphur dioxide, nitrogen dioxide and oxides of nitrogen, particulate matter, carbon monoxide and ozone. In 2008 the original 1996 Framework Directive was combined with three ‘daughter directives’ to create the Ambient Air Quality Directive 2008/50/EC.

In more recent years their have been several key updates and new pieces of regulation. DEFRAs Clean Air Strategy published in 2018, lays out the comprehensive action that is required in order to meet international targets for air pollution reduction.

In 2021, the WHO updated its air quality guidelines for the first time in sixteen years, with the guideline amounts for emissions of some pollutants being halved and in some cases reduced by as much as 75%. These drastically reduced limits illustrate the scale of the air pollution issue.

Whilst we do not know for sure what is coming in the future, it is likely we will continue to see stricter limits placed on emissions in the coming years. In March 2022, the UK government proposed a new legally binding target to reduce levels of PM2.5 to 10 micrograms per cubic metre by 2040. Is this a sign of things to come in the future of air quality regulation?

BLOG
Did you know about the Sprint Pro Gas Leak Detector?
Are you still using a stand-alone gas leak detector, or thinking of buying one? If you have a Sprint Pro 2 ...
Find out more
BLOG
An Introduction to the Oil and Gas Industry
The oil and gas industry is one of the biggest industries in the world, making a significant contribution to the ...
Find out more
BLOG
Why is gas emitted in cement production?
How is cement produced? Concrete is one of the most important and commonly used materials in global construction. Concrete is ...
Find out more