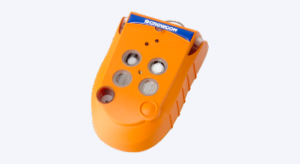 Crowcon Detection Instruments has launched a new and extended-range ammonia (NH3) sensor for its portable Gas-Pro detector. The new sensor detects ammonia levels from zero to 1000 parts per million (ppm) and, when used with a pump and sampling tube, can reach enclosed or hard-to-access spaces and detect ammonia gas leaks before they cause harm. This will protect many who are currently at risk from this corrosive and potentially explosive gas.

Ammonia is used in, or is a by-product of, many industrial sectors, including poultry farming, the chemical and semi-conductor industries and water treatment. Ammonia is also used in industrial cleaning, and is widespread in refrigeration and air conditioning systems, where it has largely replaced chlorofluorocarbon (CFC) and hydrochlorofluorocarbon (HCFC) gases. However, despite being ‘greener’ than its predecessors, ammonia brings its own risks. It is corrosive (for example, if it touches mucous membranes in the eyes or is inhaled) and can be explosive. The risks of ammonia vary according to the environment: as a gas, ammonia is lighter than air and disperses quickly, but in damp conditions it forms ammonia vapour, which behaves very differently. In enclosed spaces, ammonia gas can become trapped and explode. Crowcon’s ‘Talking Gas’ series includes a factsheet on ammonia (click here to download it), which explains the risks in more detail.

Why use a gas detector for ammonia?

Many people with be familiar with the pungent smell of ammonia and may wonder why a detector is needed at all. However, ammonia leaks in inaccessible or enclosed spaces may be left undisturbed for long periods, and even in populated areas continued exposure can cause olfactory fatigue, whereby a person exposed to ammonia ceases to smell and therefore to detect it.

It is also extremely helpful to know that ammonia is present either before anyone is exposed to it, or immediately upon exposure to dangerous levels, and this is particularly important in confined spaces, which may ‘trap’ the gas at high concentrations. The likelihood that ammonia gas will explode is also greater in enclosed areas, adding an extra level of risk. ‘The need to detect ammonia leaks in confined spaces is among the key benefits of our new ammonia sensor for the Gas-Pro,’ explains Ed Clapham, Portables and Digital Product Manager. ‘The Gas-Pro is designed to protect from leaks in enclosed or inaccessible spaces, where exposure to ammonia gas can become very debilitating, very quickly, and there is a real risk of explosion. Users can add a pump and sample tube to the Gas-Pro, and use the ammonia sensor to detect leaks in even hard-to-reach and enclosed spaces –spaces that conventional detectors may not be able to reach.’

For further reassurance, the Gas-Pro with new ammonia sensor works seamlessly with Crowcon Connect, a cloud-based service that makes fleet management straightforward, with integrated proof of compliance and maintenance alerts. For more facts on ammonia, click here to download the factsheet; further details on Crowcon’s Gas-Pro with ammonia sensor can be found on the datasheet.