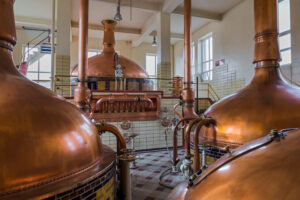 The history of brewing is long and honourable – it is thought that, long before London’s medieval citizens were making beer in their kitchens, it was enjoyed by the Greeks and Romans. By the 1400s, the UK’s religious communities were at the heart of commercial beer brewing, with St Paul’s Cathedral alone churning out 70,000 gallons of the stuff each year. Now, beer-making is a much more secular affair, but while the equipment used and volumes produced may be different, many of the fundamental processes remain unchanged. As do many of the challenges. The production and release of carbon dioxide (CO2) presents a risk at several points in the brewing process; for example during yeast fermentation – the point at which alcohol is created. Today, fermentation is carried out using bacteria in an enclosed tank, and the activities of those bacteria create the alcohol, releasing CO2 as they do so.

Monitoring CO2 in all brewing areas

Crowcon was already managing the site’s fleet of portable Gasman CO2 monitors when a new need arose. The brewery site had just undergone a major upgrade, which included a new ventilation system to make sure that all hazardous gases (including CO2) were purged effectively. It is vital to remove gas hazards on brewing sites, not least because breweries often require staff to work in confined spaces, which increases the risk of toxic gases – as a 2013 fatal incident in Mexico, in which seven brewery workers died, shows.
Even when CO2 leaks do not actually kill people, they can still cause major upheaval and liability, as in the 2015 Greene King CO2 leak. In this case, inspection of the customer’s upgraded brewery revealed that it needed a gas detection system, but this was not straightforward due to the size and type of site involved. However, the challenge had to be overcome, because the measurement and handling of CO2 is critical to the business’s safety processes.

Carbon dioxide can be extremely dangerous or even fatal, especially in the large quantities that beer brewing uses and generates. The customer turned to our engineered fixed systems (EFS) team, who designed and installed a custom-made fixed CO2 monitoring system with a GM addressable controller that constantly monitors high-risk areas of the upgraded site. The GM controller comes with both an LCD display and a live online feed feature that allows an authorised person to read and/or action the system from any location. So, the fixed system complements the customer’s existing fleet of Gasman portables to provide whole-brewery CO2 monitoring. As Jackie Marsh, Technical Specifications Engineer explains of the EFS team explains: ‘We had to consider the large scale of production and the historic nature of the site, as well as the risk of CO2 leaks in multiple areas. By installing a custom-made fixed solution and using this alongside the existing portable Gasman detectors, we made sure that all areas used for beer production can be monitored continuously and/or periodically, according to need.’

The customer can now brew all of the beer it needs to, safe in the knowledge that staff will be clearly alerted in good time, should any CO2 leak or accumulation occur. And that has to be good news for brewing staff and beer drinkers alike!