Areas where there is the possibility of the presence of an explosive mixture of flammable gas, vapour, or dust and air are reffered to as ‘hazardous’, and other areas as ‘safe’ or ‘non hazardous’. Any electrical equipment used in hazardous areas, including gas detection equipment, must be specially tested and approved to ensure that, in use even under a fault condition, it cannot initiate an explosion.

ATEX, (derived from Atmosphere Explosif) is the name given to the framework for controlling explosive atmospheres and the standards of equipment and protective systems used in them. ATEX consists of Directives and is a continuance of CENELEC standards. It addresses issues that were not addressed with the original EN standards such as dust hazards. It is intended that these common standards should completely remove trade barriers within the European Community.

ATEX requires employers to eliminate or control the risks from dangerous substances. Site operators must ensure that plant, equipment, protective systems and any associated connecting devices must only be brought into service if the explosion protection document indicates that they can be safely used in an explosive atmosphere. ATEX is based on the requirements of two European Directives.

1) Directive 99/92/EC (also known as ‘ATEX 137’ or the ‘ATEX Workplace Directive’) on minimum requirements for improving the health and safety protection of workers potentially at risk from explosive atmospheres. 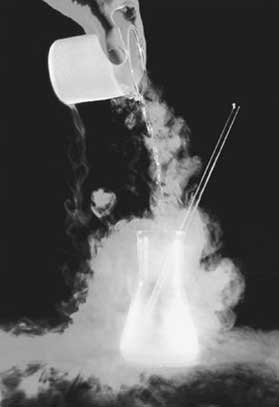 Hazardous places are classified in terms of zones on the basis of the frequency and duration of the occurrence of an explosive atmosphere.

Areas subject to flammable gas hazards are classified as either Zone 0, Zone 1 or Zone 2.

Areas subject to flammable dust hazards are classified as either Zone 20, Zone 21 or Zone 22.
Note: Layers, deposits and heaps of combustible dust must be considered as any other source which can form an explosive atmosphere.

A description of each Zone is shown on the table on the page below.

In equipment design various protection techniques are employed to prevent explosions. Examples are given in the table below.

Gases are grouped together based on the amount of energy required to ignite the explosive mixture of gases with air. Equipment is classified into groups according to the gases and vapours for which it is suitable.

The ATEX Directive requires certified products to be marked with the CE mark (confirms compliance with mandatory EMC regulations and the Low Voltage Directive for equipment containing mains voltages), the ‘EX’ mark (indicates that the equipment is designed for use in a hazardous area) and the equipment code (confirms the group, protection concept gas group and temperature classification for which the product is certified). 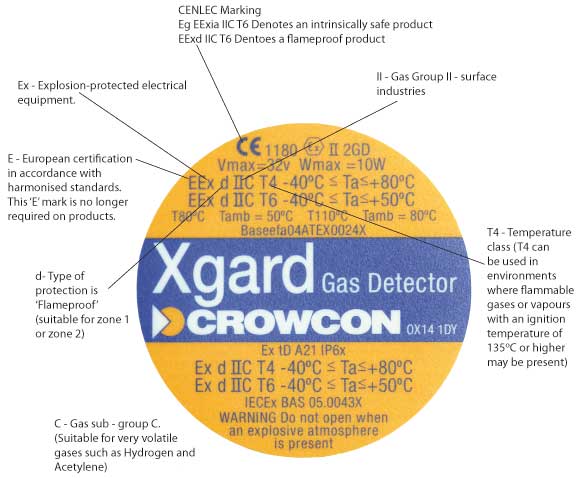 Note: Tamb (Ta) denotes the ambient temperature range for which the product is certified (ie will not cause an ignition); it does not indicate the operating temperature of the product.

There are many accredited approval bodies that test products and audit quality procedures to verify that products comply with the requirements of mandatory directives such as ATEX. For services relating to ATEX and IECEx approvals Crowcon uses Baseefa, Sira and UL/Demko.
For services relating to North American approvals Crowcon uses UL (Underwriters Laboratories), and CSA (Canadian Standards Association)

As a result of North America, Canada and Europe moving towards harmonization the National Electric Code (NEC) and the Canadian Electric Code (IEC) now recognise the use of the European Zone system for classification of hazardous areas. NEC’s Article 505 has basically created an Americanized version of the International Electrotechnical Commission (IEC, See below) and CENELEC Zone system. NEC 505 is not the same but it fits the IEC European Zones into it while maintaining NEC protection techniques. In North America, hazardous areas are separated by classes, divisions, zones and groups to define the level of safety required for equipment installed in these locations. Classes define the general form of the flammable materials in the atmosphere. Divisions define the probability of the presence of flammable materials. Zones define the location as in Europe and Groups classify the exact flammable nature of the material.

Process plants are divided into Zones (European and IEC method) or Divisions (North American method) according to the likelihood of a potentially explosive atmosphere being present.

Mine Safety and Health Administration (MSHA)
The North American MSHA’s Approval and Certification Centre approves and certifies certain mining products for use in underground coal and gassy underground metal mines. The centre which is internationally recognized, tests equipment, instruments, and materials for compliance with Federal regulations. Products that pass testing are deemed MSHA approved or MSHA certified.

International Electrotechnical Commission (IEC)
The IEC was founded several years ago and consists of many countries including USA. Its purpose is to set up standards of explosion protection for electrical products and classification of areas.

IECEx is an international certification scheme created by IEC to facilitate international trade in electrical equipment intended for use in explosive atmospheres. The emergence of the IECEx standard provides an opportunity to sell products in countries that do not accept the ATEX or UL standards.

The IECEx certificate of conformity attests that the products conform to the relevant IEC standards. The certificate is recognized by all participating countries as being equivalent to their own national certification. For more information on IECEx and details of the member bodies in each country please refer to www.iecex.com.