Home / Resources / Talking Gas: A Series / What is Gas? / Flammable Risk / Combustion of Gases and Vapours 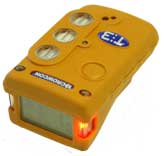