The normal concentration of oxygen in the atmosphere is approximately 20.9% volume. Oxygen levels can be dangerous if they are too low (oxygen depletion) or too high (oxygen enrichment). The same oxygen monitor will alert to both enrichment and depletion. 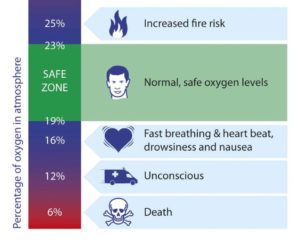 The table below shows the effect of a diluting gas on the level of oxygen.