It’s only natural for us to associate the need for gas detection in the oil and gas, and steel industries, but have you thought about the need to detect hazardous gases such as carbon dioxide and nitrogen in the brewing and beverage industry?

Maybe it’s because nitrogen (N2) and carbon dioxide (CO2) are naturally present in the atmosphere. It could be that CO2 is still under-valued as a hazardous gas. Although in the atmosphere CO2 remains at very low concentrations – around 400 parts per million (ppm), greater care is needed in brewery and cellar environments where in confined spaces, the risk of gas canisters or associated equipment leaking could lead to elevated levels. As little as 0.5% volume (5000ppm) of CO2 is a toxic health hazard. Nitrogen on the other hand, can displace oxygen.

CO2 is colourless, odourless and has a density which is heavier than air, meaning pockets of CO2 gather low on the ground gradually increasing in size. CO2 is generated in huge amounts during fermentation and can pose a risk in confined spaces such as vats, cellars or cylinder storage areas, this can be fatal to workers in the surrounding environment, therefore Health & Safety managers must ensure the correct equipment and detectors are in place.

Brewers often use nitrogen in multiple phases of the brewing and dispensing process to put bubbles into beer, particularly stouts, pale ales and porters, it also ensures the beer doesn’t oxidise or pollute the next batch with harsh flavours. Nitrogen helps push the liquid from one tank to another, as well as offer the potential to be injected into kegs or barrels, pressurising them ready for storage and shipment. This gas is not toxic, but does displace oxygen in the atmosphere, which can be a danger if there is a gas leak which is why accurate gas detection is critical.

Gas detection can be provided in the form of both fixed and portable. Installation of a fixed gas detector can benefit a larger space such as plant rooms to provide continuous area and staff protection 24 hours a day. However, for worker safety in and around cylinder storage area and in spaces designated as a confined space, a portable detector can be more suited. This is especially true for pubs and beverage dispensing outlets for the safety of workers and those who are unfamiliar in the environment such as delivery drivers, sales teams or equipment technicians. The portable unit can easily be clipped to belts or clothing and will detect pockets of CO2 using alarms and visual signals, indicating that the user should immediately vacate the area.

At Crowcon, we’re dedicated in growing a safer, cleaner, healthier future for everyone, every day by providing best in class gas safety solutions. It’s vital that once gas detectors are deployed, employees should not get complacent, and should be making the necessary checks an essential part of each working day as early detection can be the difference between life and death.

Quick facts and tips about gas detection in breweries:

Leave a reply on Have you ever thought about the dangers behind your favourite beverage? 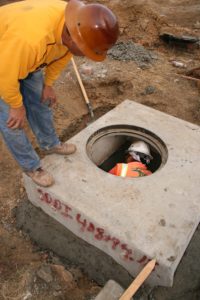 OSHA (Occupational Safety and Health Administration) has released a factsheet (29 CFR 1926 Subpart AA) on all the rules and regulations of residential workers in confined spaces. OSHA works to assure the safety and health of all of America’s working people.

This blog highlights what we think are the key points.

Well, how is a confined space defined?

OSHA defines these as

There are two different variants on confined spaces. Those that contain hazardous conditions and those that do not contain a physical hazard to the individual.

A confined space that contains hazardous conditions could be considered a permit-required space under the new regulations (PRCS). These spaces might be dangerous to the life of the worker if the space hasn’t been investigated, tested and controlled.

Spaces that tend not to be permit-required confined spaces generally do not contain life threatening hazards. Attics, basements and crawl spaces have a smaller risks but still fall into new regulations.

I’m an employer. What do I need to do?

Still not clear? Don’t worry, the factsheet offers insight and obligations for all kinds of employers.

Under the new standards, the obligation of the employer will depend on what type of employer they are. The controlling contractor is the main point of contact for any information about PRCS on site.

How are the new regulations different to the previously applied rules?

The guidelines require employers to figure out what confined spaces their employees are working in, what hazards there are and how these can be made safer, develop rescue plans and ensuring staff training.

For all the facts, visit https://www.osha.gov/Publications/OSHA3914.pdf

Leave a reply on Don’t get caught in a tight space!

Good confined space entry procedure requires the use of a pumped portable detector to check the space is safety to enter. But some detectors don’t have pumps built in, in which case, an aspirator should be used. An aspirator is a manual system for drawing the air through a tube to the sensor, and it can work well. However, it is something that requires practice to give confidence that you are doing it right.

END_OF_DOCUMENT_TOKEN_TO_BE_REPLACED

Leave a reply on Successful aspirations

END_OF_DOCUMENT_TOKEN_TO_BE_REPLACED

Carbon dioxide (CO2) gas is commonly used in the manufacture of popular beverages. The leak at the Greene King brewery in Bury St Edmunds (UK) last week, is a reminder of the importance of effective gas detection. It resulted in twenty workers having to be rescued by emergency services and local residents being evacuated. So what is carbon dioxide, why is it dangerous and why do we have to monitor it carefully?

END_OF_DOCUMENT_TOKEN_TO_BE_REPLACED

Leave a reply on Carbon Dioxide – Friend and Foe?

The theme of the hazards of confined space entry is one we frequently return to, along with importance of using the correct safety procedures both for the pre-entry check and while in the confined space. But confined spaces are not always immediately obvious, and thorough risk assessment can be essential.

END_OF_DOCUMENT_TOKEN_TO_BE_REPLACED

Despite the significant amount that has been published about the dangers of confined space entry, recent evidence in the news suggests that people still do not fully understand the risks or take appropriate precautions. In the news this week, Dorset farm owner has been fined for serious safety failings after one of his workers died following exposure to toxic gases escaping from a tank during tank maintenance.

END_OF_DOCUMENT_TOKEN_TO_BE_REPLACED

A common question we encounter at Crowcon is when to use a pump or aspirator with a portable gas detection device. I’d like to share some thoughts about the use of personal detectors with pumps or aspirators as part of an effective confined space pre-entry check.

END_OF_DOCUMENT_TOKEN_TO_BE_REPLACED

Leave a reply on Getting yourself out of a hole