What is a Flame Detector?

A flame detector is a type of sensor that can detect and respond to the presence of a flame. These detectors have the ability to identify smokeless liquid and smoke that can create open fire. For example, in boiler furnaces flame detectors are widely used, as a flame detector can detect heat, smoke, and fire. These devices can also detect fire according to the air temperature and air movement. The flame detectors use Ultraviolet (UV) or Infra-Red (IR) technology to identify flames meaning they can alert to flames in less than a second. The flame detector would respond to the detection of a flame according to its installation, it could for example sound an alarm, deactivate the fuel line, or even activate a fire suppression system.

Where would you find these Detectors?

What are the Components of a Flame Monitoring System and does it work?

The major component of a flame detector system is the detector itself. It comprises of photoelectric detective circuits, signal conditioning circuits, microprocessor systems, I/O circuits, and wind cooling systems. The sensors in the flame detector will detect the radiation that is sent by the flame, the photoelectric converts the radiant intensity signal of the flame to a relevant voltage signal and this signal would be processed in a single chip microcomputer and converted into a desired output.

How many types of Flame Detectors are there and how do they work?

There are 3 different types of flame detector: Ultra-Violet, Infra-Red and a combination of them both Ultra-Violet-Infra-Red

This type of flame detector works by detecting the UV radiation at the point of ignition. Almost entirely all fires emit UV radiations, so in case of the flame, the sensor would become aware of it and produce a series of the pulses that are converted by detector electronics into an alarm output.

The infra-red flame detector works by checking the infrared spectral band for certain ornamentation that hot gases release. However, this type of device requires a flickering motion of the flame. The IR radiation may not only be emitted by flames, but may also be radiated from ovens, lamps, etc. Therefore, there is a higher risk for a false alarm

This type of detector is capable to detect both the UV and IR radiations, so it possesses both the UV and IR sensor. The two sensors individually operate the same as those described, but supplementary both circuitry processes signals are present due to there being both sensors. Consequently, the combined detector has better false alarm rejection capability than the individual UV or IR detector.

Are any products available?

The FGard IR3 delivers superior performance in the detection of hydrocarbon fires. The device utilises the latest IR flame detection algorithms to ensure maximum false alarm immunity. The detector has been independently tested to demonstrate it can detect a hydrocarbon fuel pan fire at nearly 200 feet in less than 5 seconds. The FGuard IR3 has a multi spectrum IR allowing for 60 metre flame detection range. That can detect all Hydrocarbon fires with no condensation forming on the window, improving reliability and performance across temperature. This product has fast detection time responding in less than 5 seconds to 0.1m² fire at 60 metres.

Crowcon offers a range of infra-red (IR) and ultra-violet (UV) based flame detectors for quickly detecting flames at a distance. Depending on model, this includes a variety of gas and fuel fires including those generated from hydrocarbons, hydrogen, metals, inorganic and hydroxyl sources. 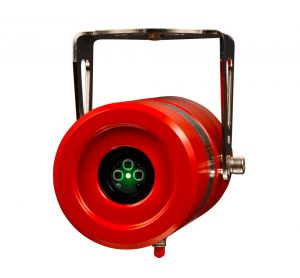 Leave a reply on What is a Flame Detector and How Does it Work?