Hydrogen has a long history of use as an energy source. Traditionally it has been used as a component of rocket fuel and in gas turbines to produce electricity, or burned to run combustion engines for power generation. In the oil and gas industry, refineries use excess hydrogen generated from the catalytic reforming of naphtha as fuel for other unit processes. In addition, by-product hydrogen is also generated: in the chemical industry, for example, the chloro-alkali industry produces hydrogen as a by-product of chlorine generation and petrochemical plants release hydrogen as a by-product of their olefin production.

Hydrogen is commonly used as a raw material to produce ammonia and methanol for agriculture, mining and marine applications. Pure hydrogen gas is also used as a reducing agent for blast furnaced in steel plants, as part of the industry’s effort to reduce CO2 emissions.

Although hydrogen and energy have a shared history, and the hydrogen fuel cell (where hydrogen and oxygen are mixed in the presence of an electrolyte to produce both electricity and water as by-products) was invented almost 200 years ago, see below schematic of a hydrogen fuel cell. Hydrogen’s use as a fuel of choice for vehicles and domestic gas supply in consumer environments is relatively new. Hydrogen burns clean when mixed with oxygen, and is seen as a green fuel alternative in transport, shipping and heating (both domestic and industrial). 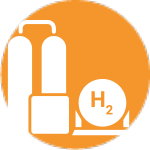 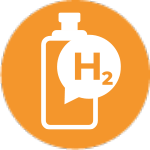 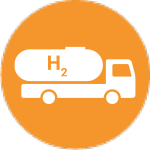 Hydrogen has a wide flammable range (4%–74% vol. in air), so even small quantities of H2 can cause explosions when mixed with atmospheric air. Just a spark of static electricity from a person’s finger is enough to trigger an explosion when hydrogen is present, and in many locations where hydrogen is used, spark ignition from electrical components or maintenance activities is an ever-present risk.

Hydrogen is non-toxic, but in indoor environments like battery storage rooms, hydrogen may build up and cause asphyxiation by displacing oxygen. In fuel cell stacks, hydrogen is prone to leak from seals present at process connections near the H2 storage cylinders.

Another concern around hydrogen flammability and detection is that hydrogen flames are pale blue in colour and nearly invisible to the human eye. Hydrogen flames also emit low radiant heat, so people may not feel that heat until they are very close to the flame. Flame detectors are therefore used to complement point gas detectors, as they cover a wide area. Hydrogen flame can be detected using multi-spectrum infrared detectors.

In summary, gas detection represents the first line of defence against hydrogen leaks. Actions should be taken to prevent hydrogen release before a flame or explosion can occur. Flame detectors are used as perimeter monitoring to ensure that any hydrogen flame is detected and appropriate alert/ alarm signals are given to make operators aware.

A compact and fully ruggedised single gas detector for the toughest of industrial environments.

Our most flexible gas controller package.

Regulations and requirements in the hydrogen industry

BLOG
What do you need to know about Hydrogen?

Hydrogen, alongside other renewables and natural gas has an increasingly vital role to play in the clean energy landscape. Hydrogen is found in various things including light, water, air, plants, and animals, however, is often combined with other chemicals.

One the world’s largest chemical companies, with over 300 companies worldwide focusing on specialty chemicals, paints and coatings, have chosen Crowcon as their gas detection partner.

Hydrogen is set to play a vital role in producing cleaner energy. With the shift to hydrogen as a clean fuel, and the emphasis on its usage globally, it is important for the relevant people, within industries that utilise hydrogen, to gain a full awareness of the dangers and impact of this shift.