As the primary technology for detecting flammable gases since the 1960’s, when they were first invented, pellistor sensors are a valuable detection tool for those working in combustible environments.

Also known as a catalytic bead sensor, the pellistor, detects combustible gases or vapours that fall below the explosive range to warn of rising gas levels. It does this by using a coil of resistance wire inside a small active bead comprising cement and platinum catalyst. The catalyst lowers the temperature at which gas ignites around the bead, ensuring flammable gas present causes the bead temperature to rise and the resistance of the coil to rise providing a measure of flammability via the comparison of voltage with a reference circuit. Often the reference circuit contains a second bead similar to the first except with its catalyst deliberately poisoned. The poisoning of the compensating element is to ensure catalytic oxidation does not occur. But it still responds in the same way to unwanted signals generated by the local environment around the beads, such as ambient temperature, humidity or gas flow rate.

When a combustible gas is present the temperature and resistance of the bead increases in relation to the resistance of the inert reference bead. The difference in resistance can then be measured, allowing measurement of gas present. The two beads are placed in a circuit which causes them to heat to between 230-250˚C; a temperature where the reaction to flammable gases will occur if there is sufficient platinum catalyst present.

When they were invented, pellistors were a solution to the long-running flame safety lamp and canary techniques in mines. More recently, catalytic sensors have been harnessed within industrial applications like oil refineries and oil rigs. Pellistor sensors tend to be lower in cost than IR sensors due to differences in the level of technology, however, on the downside, they may need to be replaced more frequently as catalysts become poisoned, or beads cracked by high concentrations of flammable gas causing overheating. 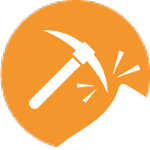 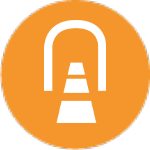 When exposed to high gas concentrations pellistor functionality reduces. Concentrations of >100%LEL can compromise sensor performance and create an offset in the zero/base-line signal. This is caused by rapid increases in temperature on the surface of the bead causing it to expand unevenly. The outside of the bead splits from the inside of the bead and cracks form.

One of the main issues with pellistors is their susceptibility to poisoning or inhibition. The capacity of the catalyst surface to oxidize the gas is drastically reduced when it is poisoned, therefore lessening the functionality of the sensor.  Higher power pellistors often have a greater catalytic activity and are less vulnerable to poisoning. More porous beads also have greater catalytic activity as their surface volume the gas can get to is increased. A pellistor that has been poisoned will remain electrically operational but may fail to respond to gas. This can be particularly troublesome as it can give a misleading image that the gas detector and control system are healthy, when in fact they would not detect a flammable gas leak. This constitutes an unrevealed fault.

Another problem for these types of sensors is that of extreme mechanical shock or vibration.

Incomplete combustion results and carbon deposits on the bead also causes a problem for pellistors. As the carbon ‘grows’ in the pores it creates mechanical damage and therefore lessens the sensor’s detection capacities, or it can simply block the passage of gas to the catalyst, lessening the sensor response.

Faults can only be recognised through bump testing prior to each use to ensure that performance is not being degraded.

Use of styrene, vinyl chloride or other polymerising compounds

One last issue is when styrene, vinyl chloride or some other polymerising compounds are used. The heat from the pellistor beads can cause the gas to build a neat “plastic bag” around the beads during the first exposure to gas. During subsequent exposures the gas cannot reach the bead as it can’t pass through the “plastic bag”, so it is not detected.

Find out more
Triple Plus+

Find out more
Fixed
Flamgard Plus

Blog
What’s the difference between a pellistor and an IR sensor?
Sensors play a key role when it comes to monitoring flammable gases and vapours. Environment, response time and temperature range are just some of the things to consider when deciding which technology is best.
Read more
Case Study
Gas Pro TK: Saving lives in a Southeast Asian refiner

Read more
Blog
Pellistor sensors – all you need to know

Pellistor sensors (or catalytic bead sensors) have been the primary technology for detecting flammable gases since the ‘60s. Despite having discussed a number of issues relating to the detection of flammable gases and VOC, we have not yet looked at how pellistors work.